I can’t get flashing over USB to work.¶

ESPHome depends on the operating system the tool is running on to recognize the ESP. This can sometimes fail. Common causes are that you did not install the drivers (see note below) or you are trying to upload from a Docker container and did not mount the ESP device into your container using --device=/dev/ttyUSB0.

Starting with ESPHome 1.9.0, the ESPHome suite provides esphome-flasher, a tool to flash ESPs over USB.

Then, install esphome-flasher by going to the releases page and downloading one of the pre-compiled binaries. Open up the application and select the serial port you want to flash to (on windows you can use the “device manager” to check if it’s the right one). 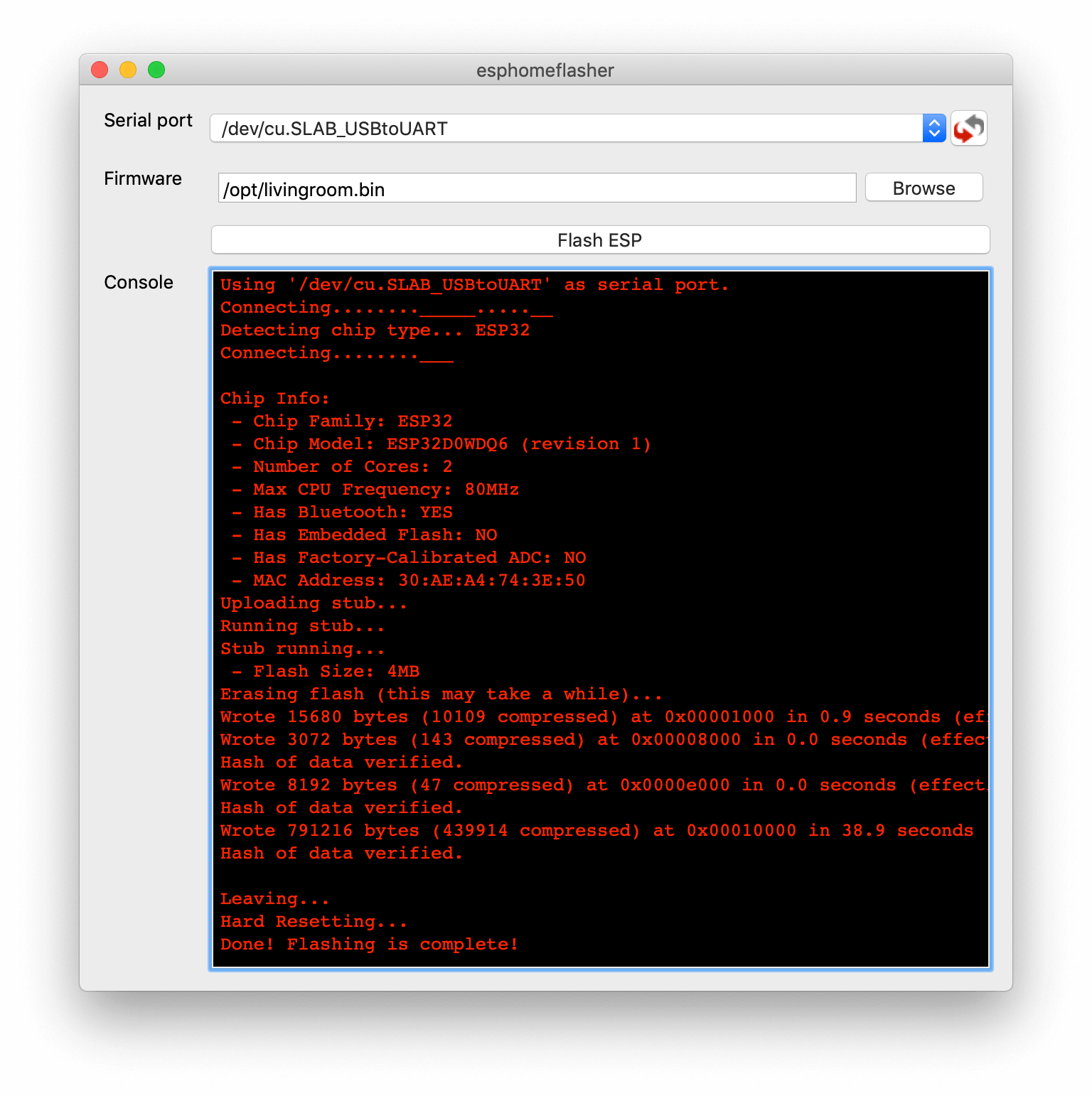 If the serial port is not showing up, you might not have the required drivers installed. ESPs usually ship with one of these two UART chips:

If you’re just seeing Connecting....____.... on the screen and the flashing fails, that might be a sign that the ESP is defect or cannot be programmed. Please double check the UART wires are connected correctly if flashing using a USB to UART bridge. For some devices you need to keep pressing the BOOT button until flashing has begun (ie. Geekcreit DOIT ESP32 DEVKIT V1).

That’s no good. Here are some steps that resolve some problems:

How to submit an issue report¶

First of all, thank you very much to everybody submitting issue reports! While I try to test ESPHome/yaml as much as I can using my own hardware, I don’t own every single device type and mostly only do tests with my own home automation system. When doing some changes in the core, it can quickly happen that something somewhere breaks. Issue reports are a great way for me to track and (hopefully) fix issues, so thank you!

For me to fix the issue quickly, there are some things that would be really helpful:

You can find the issue tracker here https://github.com/esphome/issues

How do I update to the latest version?¶

And in Hass.io, there’s a simple UPDATE button when there’s an update available as with all add-ons

How do I update to the latest beta release?¶

ESPHome has a beta release cycle so that new releases can easily be tested before the changes are deployed to the stable channel. You can help test ESPHome (and use new features) by installing the tested beta:

The beta docs are available at beta.esphome.io

How do I use the latest bleeding edge version?¶

First, a fair warning that the latest bleeding edge version is not always stable and might have issues. If you find some, please do however report them if you have time :)

To install the dev version of ESPHome:

How do I use my Home Assistant secrets.yaml?¶

Does ESPHome support [this device/feature]?¶

If it’s not in the docs, it’s probably not supported. However, I’m always trying to add support for new features, so feel free to create a feature request in the ESPHome feature request tracker. Thanks!

I have a question… How can I contact you?¶

Sure! I’d be happy to help :) You can contact me here:

Jep, that’s a known issue. However, it seems to be very low-level and I don’t really know how to solve it. I’m working on possible workarounds for the issue but currently I do not have a real solution.

Some steps that can help with the issue:

ESPHome uses mDNS to show online/offline state in the dashboard view. So for that feature to work you need to enable host networking mode

On MacOS the networking mode (“-net=host” option) doesn’t work as expected. You have to use another way to launch the dashboard with a port mapping option and use alternative to mDNS to have the online/offline stat (see below)

Alternatively, you can make esphome use ICMP pings to check the status of the device with the Hass.io Addon "status_use_ping": true, option or with docker -e ESPHOME_DASHBOARD_USE_PING=true See also https://github.com/esphome/issues/issues/641#issuecomment-534156628.

Can Configuration Files Be Recovered From The Device?¶

Always back up all your files!

A new version has been release since you last visited this page: 1.16.2 🎉 View Changelog